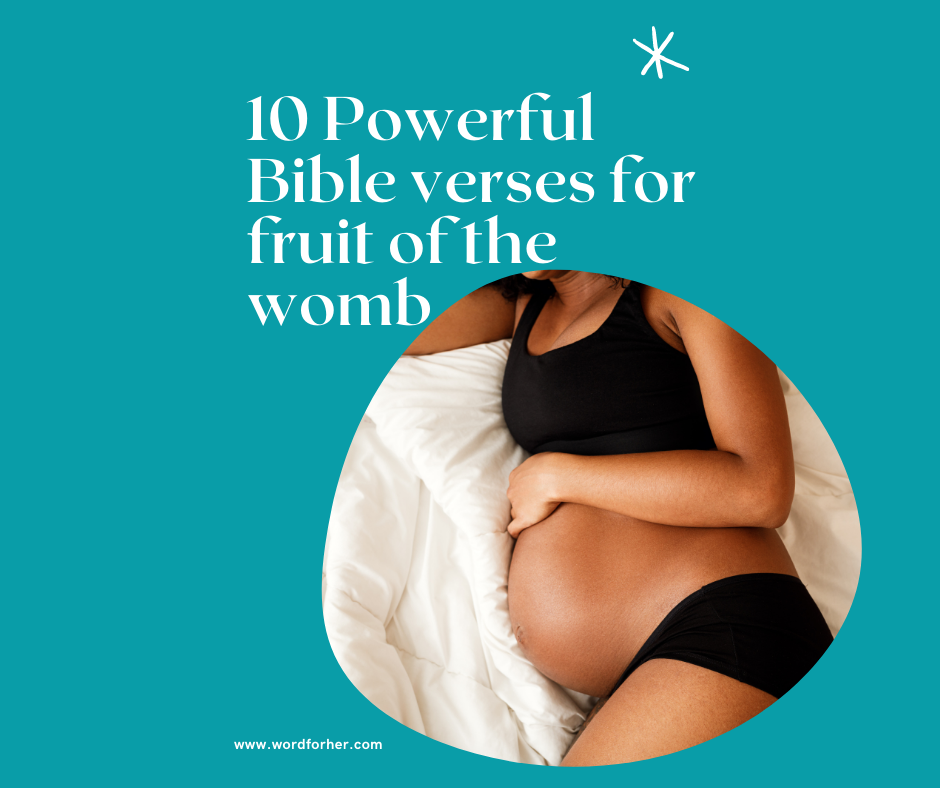 10 Powerful Bible verses for fruit of the womb

Sarah had a child when she was past the age; this means that she is post-menopause but our God can bypass menopause and do the impossible. The Bible recorded that she was 99 years old when Isaac was born. God gave the word of promise to Abraham that Sarah will bear a son. No one, even Sarah, didn’t believe that this word will come to pass. She thought the promise was in Ishmael, the son of her maid, Haggai, But God who cannot lie came through for Sarah. Even though she was already past the age, she received the strength to conceive the child of promise. God is no respecter of persons; If He has done it before for Sarah, He can do it again and again.

Hannah also waited on the Lord before Samuel was born. She cried to the Lord year after year in Shiloh. She didn’t give up despite the provocation of Peninnah ( her husband’s second wife ). She continued to make that yearly trip to Shiloh, and she continued to pray until the time when the Lord remembered her and gave her Samuel, a child of promise.

Racheal was loved by her husband Jacob, but she was barren. Her sister, Leah, who is also married to her husband, had children freely. Males and females, even Leah’s handmaiden, had children for Jacob, their husband. Racheal became bitter and suicidal. She told Jacob to give her children, or she would die. The humiliation from her sister was too much to bear, but when the time came, the Lord remembered her, and Racheal gave birth to the child of promise, Joseph. Joseph later became the one who delivered all of Leah’s children from famine and death.

Elizabeth and her husband were devout and blameless before God but they were barren. Elizabeth was now old but they continued in their devotion and duty to God. As Zacharias was performing his priestly duty, the angel of the Lord appeared to him and announced that Elizabeth is going to have a child and his name will be called John. John later became the forerunner of our Lord Jesus Christ

God blessed them and said,’’ Be fertile, increase in number, fill the earth, and be its master.

No one shall suffer miscarriage or be barren in your land; I will fulfil the number of your days

I will look favourably upon you, making you fertile and multiplying your people. And I will fulfil my covenant with you

You will be blessed above all the nations of the earth. None of your men or women will be childless, and all your livestock will bear young.

the voice of the lord, makes the deer to give birth

Show me a sign for good that those who hate me may see it and be ashamed,because You, Lord have helped me and comforted me

He makes the barren to keep house, to be a joyful mother of children

Behold, children are a heritage from the Lord, the fruit of the womb is a reward

Your children shall be like olive plants all around your table

The streets of the city, shall be full of boys and girls playing in its streets

So he said, ‘’ Have no doubt, I promise to bless you over and over, and give you a son and multiply you without measure

By faith, Sarah herself also received strength to conceive seed, and she bore a child when she was past the age because she judges Him faithful who had promised

The women, Sarah, Hannah, Racheal and Elizabeth, all received the sons of promise. After waiting, the Lord remembered these women and the sons born to them were exceptional children, Isaac, Samuel, Joseph and John the Baptist. The God who did it for these women is still in the business of doing miracles. Just like Sarah received strength when she was already past the age of childbearing, May you also receive the strength to conceive your babies despite any prediction of medical science, the same God yesterday is still the same today. He can do the impossible.

15 ways to lift yourself up when you’re down

10 strong reasons to pray the word

Prayers for peace in the land